Order your copy at:

You can learn more about it at www.egovseq.com.

I look forward to hearing your feedback and perhaps signing your book!

Posted by Jen Shirkani at 4:00 AM No comments:

A Breakthrough in Self-Awareness

I was conducting a phone coaching session with a client last week, someone who is near the end of our 6 month engagement. He shared a couple of powerful stories with me about self-reflection and thinking about his feelings to understand them instead of letting them run wild and undermine him.

One example was recognizing a mood he was in, and although it was a good mood, it usually brought out a snarky, sarcastic side of him. One that usually gets him in trouble, after the fact. He said as a result of the EQ work we have been doing together, he thought the sarcastic response to a question instead of saying it. A very small gesture that made a big difference in how his coworkers responded to him resulting in better collaboration, better communication and better results.

Another example he shared was recognizing in the last 30 days that he felt restless and underutilized - enough to consider resigning. We have been working together on his delegating more, trusting more, and letting go of control more. Suddenly, he no longer has a line of people in his office needing things from him. He no longer has employees coming to him for solutions and answers to trivial questions. He no longer has to get involved in fixing things himself, instead he is training and then holding people accountable. For the first time in his career, he actually has down time. He said prior to his development breakthrough he would have accepted the negative feelings of not being challenged at face value, without understanding what was underneath them and would have quit to pursue the next big thing. Instead, he spent time thinking about his feelings and processing them to recognize what they really meant.

Instead of the feelings being a negative, he sees that they are actually quite positive - the outcome of being a stronger senior leader. He is now able to redirect his energy to higher level activities. He is able to stay with his company and add value in numerous ways. I am so proud of him.

If you are interested, Goodreads is giving away a free copy of Ego vs EQ.
Click here to enter to win: https://www.goodreads.com/giveaway/show/62288-ego-vs-eq-how-top-leaders-beat-8-ego-traps-with-emotional-intelligence

The best part about having a book published is getting to talk with business colleagues and friends about life and leadership. Take a listen to my recent interview on KUCI (Irvine CA) "Real People of Orange County" with Kimberlee Martin, a dear friend of mine, whom I have known 20 years since we worked at Nordstrom South Coast together. 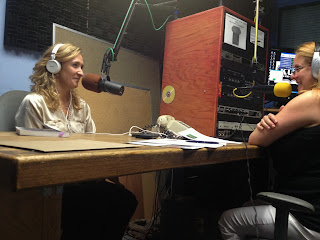